Canada is arguably the world’s premier destination for nature lovers and outdoor enthusiasts, boasting an extensive national park system that’s virtually unsurpassed in terms of its sheer size, beauty and diversity. Whether you’re in search of soaring mountain peaks, verdant forests, glistening glacial lakes or stunning coastal scenery, you’ll be met with expansive stretches of pristine nature, an intoxicating raw wilderness feel and endless opportunities for active adventures. What’s more, you’re very likely be able to enjoy all of this without the crowds found in similar spots south of the border. Here is a roundup of our favourite national parks. 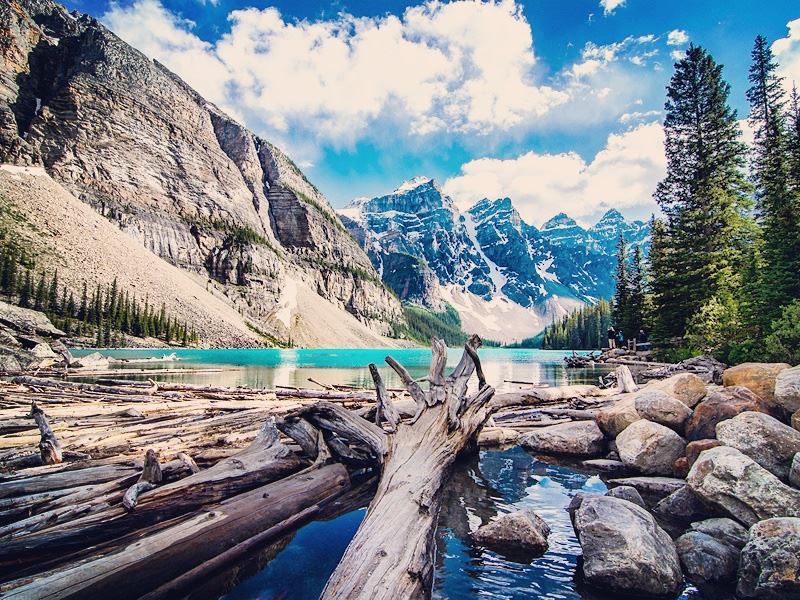 What: Filled with an endless string of natural wonders, this UNESCO World Heritage Site boasts towering granite mountains and deep fjords, an abundance of forests, beaches, waterfalls and coastal features, along with numerous picturesque seaside villages. The park’s ancient landscape dates back millennia, making it of great geological significance and providing a highly visible example of plate tectonics and all its breath-taking physical remnants. When you’ve had your fill of the impressive geology, try your hand at beachcombing, boating and kayaking along the rugged coastline, or hiking and wildlife spotting in the alpine highlands.

Highlights: The Tablelands are considered the best place in the world to access rare rocks that have emerged from deep within the Earth’s crust. Take a guided hike through the area to observe rocks billions of years in the making and admire the magnificent glacially carved landscape, that brims with fascinating flora and fauna. 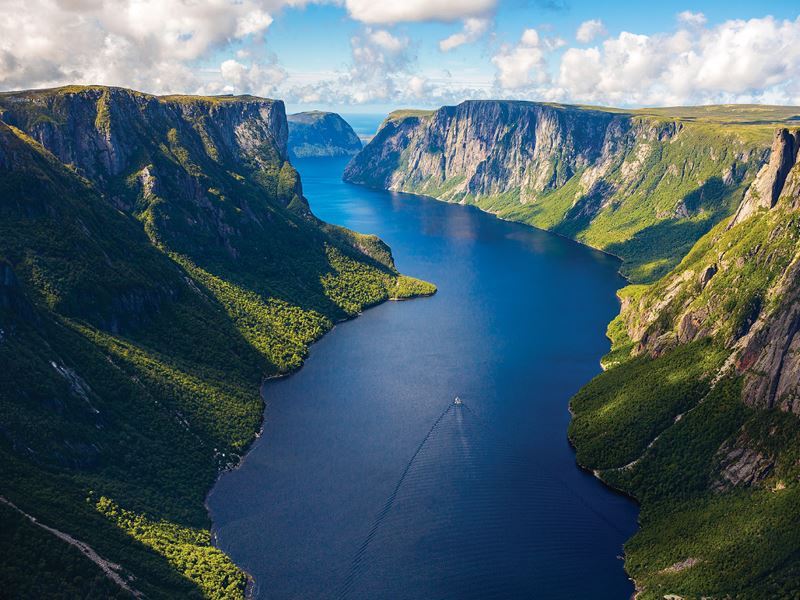 Where: This picturesque island chain is found in the Saint Lawrence River, stretching between Kingston and Brockville, at the eastern end of Lake Ontario 3 hours from Toronto.

What: One of Canada’s smallest national parks, this collection of 20 plus granite islands, hundreds of inlets and several mainland bases is home to a mix of marshland, pine forest and glittering waterways, as well as some of the richest wildlife populations in the country. Explore the lush terrain via a hiking trail, or take to the water in a kayak or powerboat to discover secluded bays, rugged coastal outcroppings and catch tantalising glimpses of rare turtle and bird species.

Highlights: Mallorytown Landing is the park’s main hub of activity, featuring a whole host of fun activities, including an interpretive centre, aquarium, picnic and camping site, kid’s playground, theatre, travelling exhibits, and plenty more to help you make the most of this unique park.

Suggested holidays: You visit this beautiful park on one of our most popular escorted tours the Eastern Explorer. Alternatively here is a self-drive itinerary – Heritage Trail or perhaps book a motorhome Classic Ontario by Motorhome 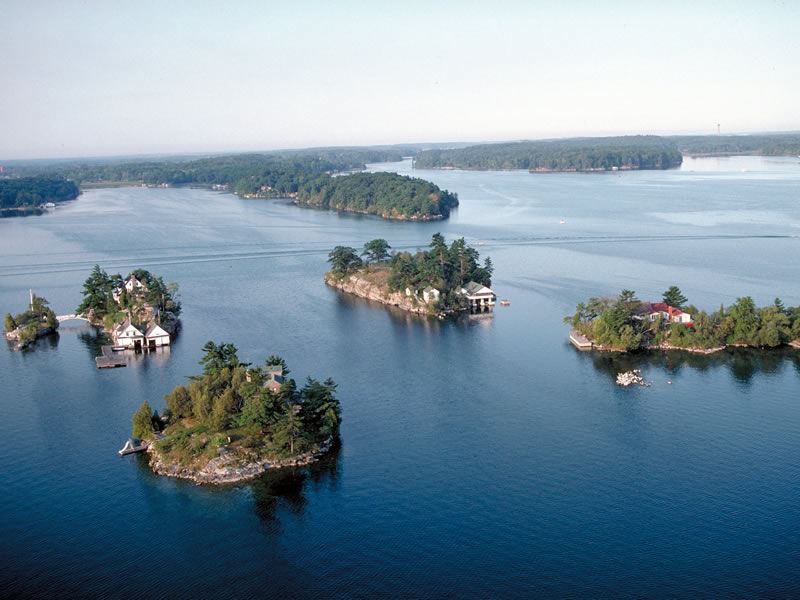 Where: The prairies of Alberta meet the peaks of the Rockies. Waterton Lakes is located in southern Alberta bordering Montana’s Glacier National Park.

What: With the Rockies as it’s backdrop, It is known for its chain of sparkling lakes, thundering waterfalls and glistening streams. There is a charming waterfront town of Waterton providing a great base to explore the glorious landscapes. What makes Waterton truly unique is the sheer diversity of wildlife and wildflowers that you’ll find in this gem of a national park.

Highlights: It has to be all about the hikes which allow you to see so much different flora and fauna on relatively short trails. The trails are numerous and well-marked – Red Rock Canyon Parkway comes well-recommended, as does a hike to Lineham Falls. 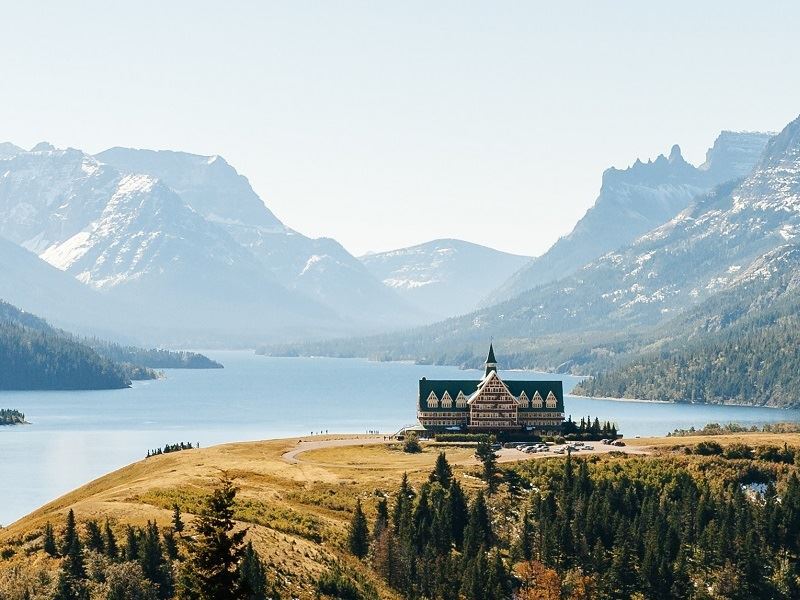 What: Within this national park there are 25 mountains that are over 3,300-feet-high, incredible arctic-alpine flora, and remarkable wildlife (white-tailed deer, moose, and the only caribou herd south of the St. Lawrence River), there’s a rugged beauty here unlike anywhere else. You’ll also find 87 miles of hiking trails - the best of which is the Mont Jacques-Cartier trail that takes around five hours and rewards with serene views of the alpine tundra.

Highlights: Enjoy canoeing, kayaking, stand-up paddleboarding, or fishing on Lake Cascapédia, and walk parts of the International Appalachian Trail (IAT) that crosses the park from east to west. Keen photographers should aim to capture the park’s unique sea of mountains at sunrise or sunset.

Where: The northern portion of Cape Breton Island, bordered by the Atlantic to the East and the Gulf of St Lawrence to the West.

What: A unique mix of Boreal, Tagia and Acadian habitats not found elsewhere in Canada characterise this enchanting corner of Nova Scotia. The park is defined by an elevated plateau with a tundra-like landscape and interspersed with deep forested river canyons that descend towards the temperate lowlands and seashore. The result is a remarkable wildlife haven, where you can expect to spot the endangered lynx, moose, grouse, minke whales, harbour seals and bald eagles. The park’s special blend of ocean, mountain and forest ecosystems, renowned hiking trails, not to mention a rich and lively cultural history, make it one Canadian park not to be missed.

Highlights: One-third of the world-famous Cabot Trail winds its way through the park, offering intrepid hikers the chance to explore the very best of Cape Breton’s mesmerising natural beauty. As you follow the trail through the highlands and hug the island’s coastline, you’ll be rewarded with sweeping panoramas over canyons, forests and beautiful seascapes.

Suggested holidays: We can tailormake a flydrive holiday for you, like this suggested itinerary Experience the Wildlife of Nova Scotia. If you’d rather have an expert guide and tour manager to help you get the best from the region, then this is a good choice Enchanting Canadian Maritimes. 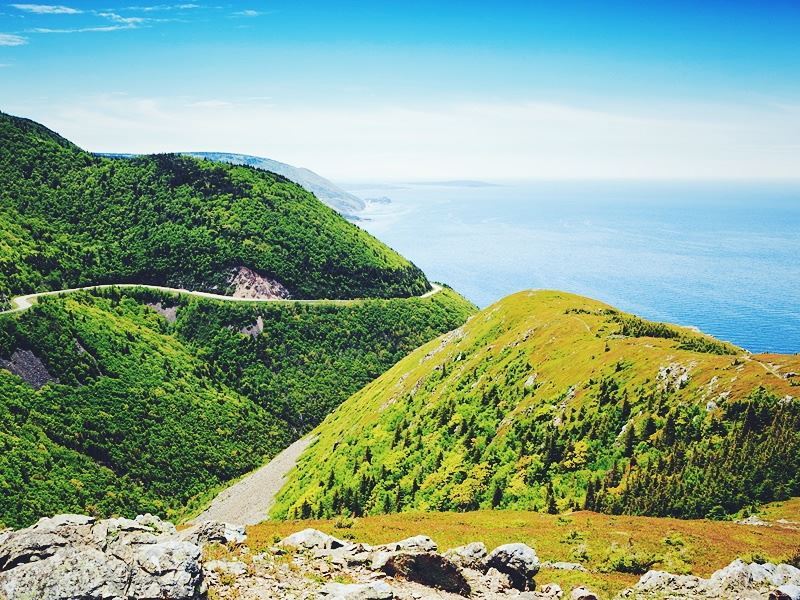 Where: Just a couple of hours north-west from Montreal and north-east from Ottawa, Mont-Tremblant is a great detour for a few days outdoor fun whilst exploring eastern Canada.

What: This 1,510- kilometre-squared playground is celebrated for its six rivers, 400 streams and lakes, sprawling Laurentians peaks, sandy beaches, canoe routes, and 40 species of mammals. There’s also 18 different hiking trails that span over 82 kilometres, a series of fantastic river routes for canoeists (the Méandres de la Diable route from Lac Chat to Mont de la Vache Noire is great if you have a half-day to spare), and hundreds of camping spots. The park has two supervised and serviced beaches: Crémaillère beach in the La Diable sector, and Lac-Provost beach in La Pimbina sector.

Highlights: The rock climbing-like Via Ferrata du Diable on the wall of the Vache Noire at the park’s entrance is a one-of-a-kind trail to allow newbies and advanced climbers to safely scale the mountain. You’ll be clipped into a steel cable running the length of the cliff as you tackle the built-in steps, beams, footbaths, walkways, and bridges overlooking the Diable River below. 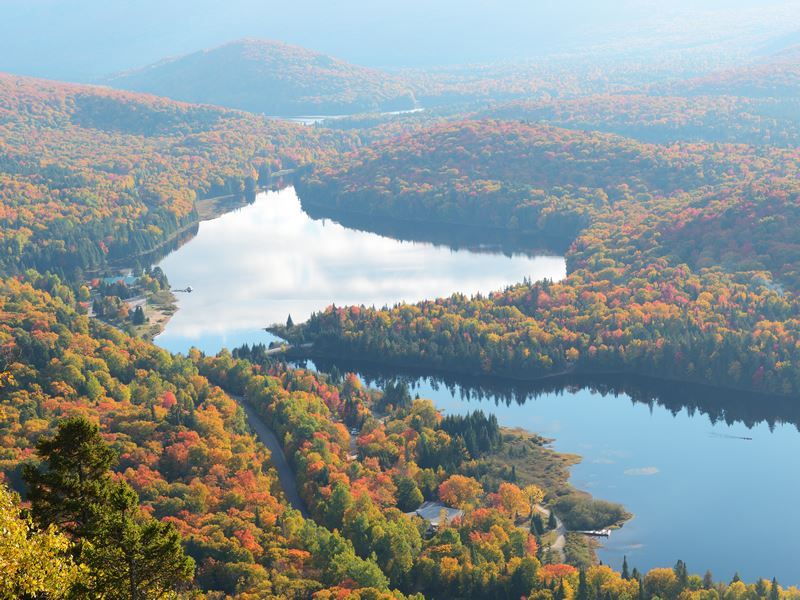 Where: Situated on the eastern slopes of the Rockies in western Alberta.

What: With jagged snow-capped peaks, colossal glacial icefields, teal-streaked lakes and flowering alpine meadows, Jasper’s legendary scenery has to be seen to be believed. Explore rugged backcountry via the extensive hiking and biking trail network, taking time to observe abundant wildlife along the way, including bears, elk, caribou and bighorn sheep. The laidback town of Jasper is filled with all the urban amenities you could want and boasts easy access to countless adventure activities that will launch you headfirst into the park’s expansive and remarkably well-preserved wilderness.

Highlights: The Columbia Icefields are a true world marvel, and definitely not to be missed. But when night falls, the opportunities for admiring Jasper’s natural splendours are far from over. The Park is a recognised Dark Sky Preserve and happens to be one of the best places on Earth for observing the night sky. Time your visit with the Dark Sky Festival in October, when enthusiasts gather for a weekend of parties, concerts and exhibitions centred around stargazing.

Suggested holiday: This flydrive itinerary gives you a couple of days to enjoy Jasper, along with other national parks in western Canada - Self-Drive Great Parks of the West 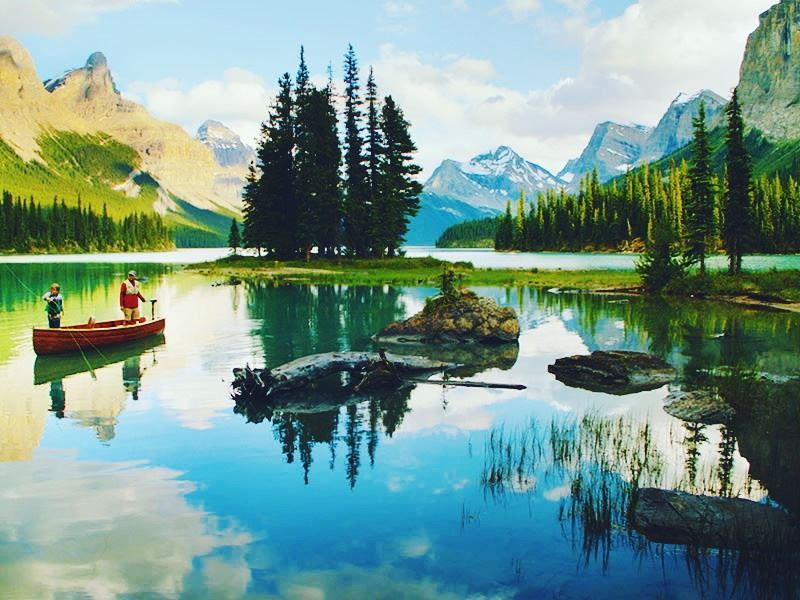 Where: Yoho National Park graces the western slopes of the Canadian Rockies.

What: Boasting some of North America’s most untarnished natural wilderness, this park is a veritable haven for outdoor lovers, brimming with breathing scenery and exceptional hiking. Witness the dramatic effects of ice and water which have sculpted vertical rock faces, soaring peaks, deep blue lakes and pounding waterfalls. Get to grips with Yoho’s fascinating geology and natural history on a guided tour of Mt Stephen and Mt Field where you’ll admire fossilised remains of some of the earliest life forms on Earth.

Highlights: Easily accessible from Highway 1 is the mesmerising Takkakaw Falls, a world-class site and one of Canada’s highest waterfalls. From here, follow the Iceline Trail, a 20-kilometre circuit that takes in some of the park’s most spectacular glaciers and mountain scenery. 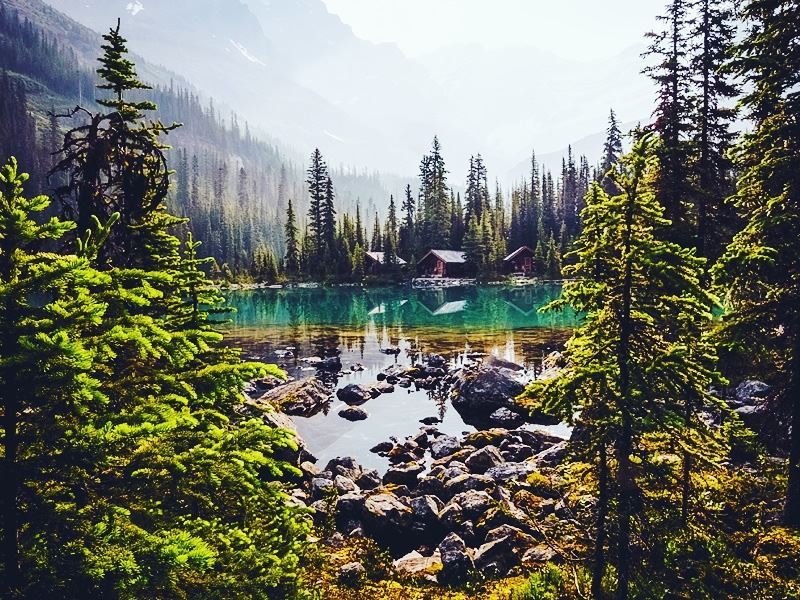 Where: In the heart of the Rocky Mountains, 80 miles west of Calgary.

What: As Canada’s oldest national park, and the world’s third oldest, Banff is one of the continent’s premier destinations, boasting almost unsurpassed levels of natural beauty with its snow-capped peaks, dense coniferous forests, alpine meadows and pristine lakes. Every year, visitors make the journey to witness the majestic mountain scenery and indulge in endless opportunities for outdoor pursuits, from hiking, biking and canoeing to backcountry camping. Visit strings of glaciers and lakes, each one more spectacular than the last, drive the scenic Icefield Parkway, and soak in the lively atmosphere of Banff town with its world-class resorts, boutiques, restaurants and breweries.

Highlights: Lake Louise is a picture-perfect destination, widely renowned as the crown jewel of the Canadian Rockies. It can get crowed, but the sheer majesty of the setting, encompassing turquoise waters, towering mountains and a stately chateau, is simply hard to beat.

Suggested holidays: Discover this fabulous region on an escorted tour Rockies Trail or enjoy the flexibility and your own home-from-home on a motorhome holiday Best of Canada's West by Motorhome 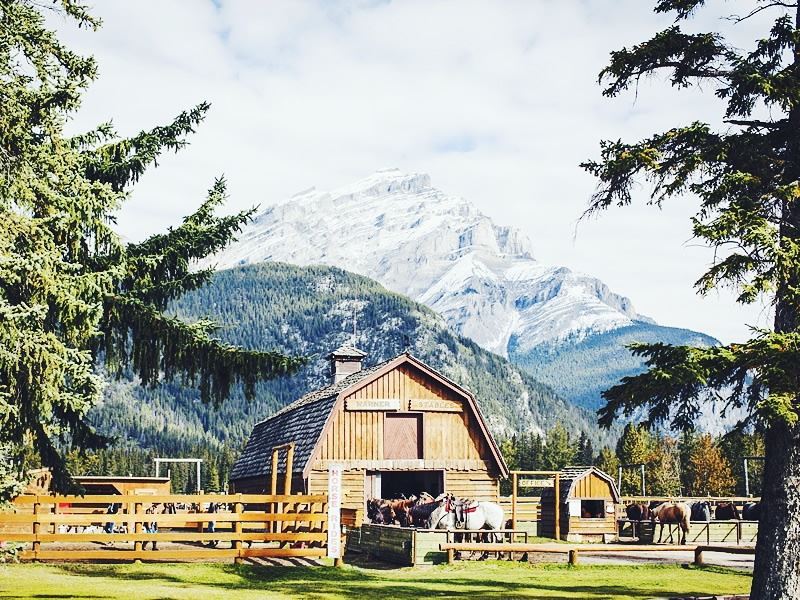 What: The Pacific Rim embodies rugged, unspoilt Canadian wilderness at its very best, harbouring lush temperate rainforests, spectacular coastal cliffs and expansive soft-sand beaches. Brave some of the country’s wildest surf at Long Beach, spot migrating humpback whales whilst hiking a coastal trail, or make your way to the spectacular Barkley Sound where you can kayak in crystal clear waters past countless islands, inlets and secluded bays.

Highlights: The entire park is a hiker’s paradise, filled with miles of sandy beaches, thriving old-growth forests and jaw-dropping coastal vistas. Tackle the epic 47-mile West Coast Trail, or opt for any number of shorter circuits, such as the spectacular Wild Pacific Trail along the Ucluelet peninsula. 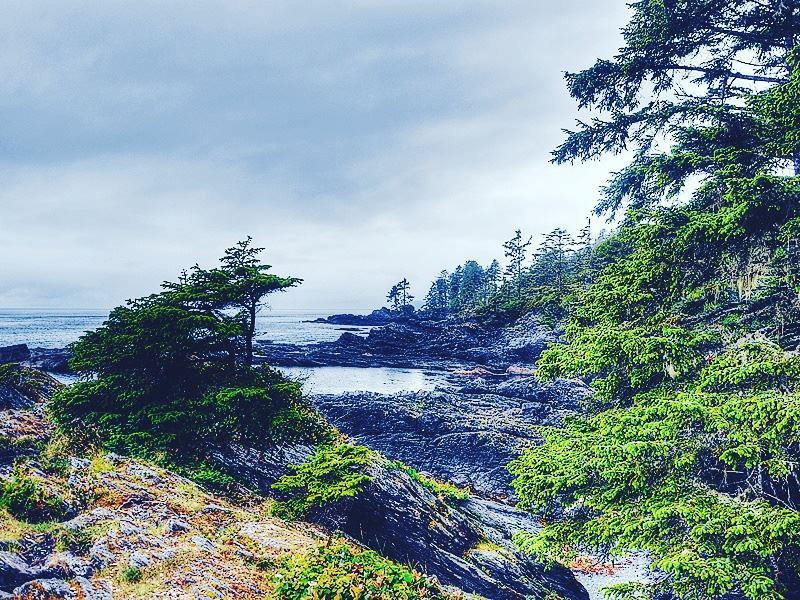 Experience BC – Wilderness and Wildlife