Prince Edward Island may be Canada’s smallest province in size and population, but it packs a punch when it comes to things to see and do with a rich history, mouth-watering cuisine, gorgeous scenery, and a vibrant arts and music scene. The provincial capital of Charlottetown is one of the best destinations when it comes to the arts, but it can be experienced throughout the island.

The Arts & Heritage Trail will lead you across the province’s five designated regions, each of which have their own distinct character and culture. You’ll be able to visit art studios and galleries, along with museums and fascinating heritage sites, meet local artisans and learn more about the handmade items created here. It’s easy to tell which businesses participate, with quilt board signs custom-designed for each one that denote which establishments are part of the Arts & Heritage Trail. A handy app is also available here so that you can choose a special themed tour or create your own customized tour. It reveals the very best experiences on the island, including festivals, theatre, music, dance, art galleries, artisan studios, craft shops, beautiful views, hands-on experiences and more.

In the meantime, we’ll take a journey to discover just what you can expect while exploring the best of PEI’s arts and music scene, beginning with its lively festivals. 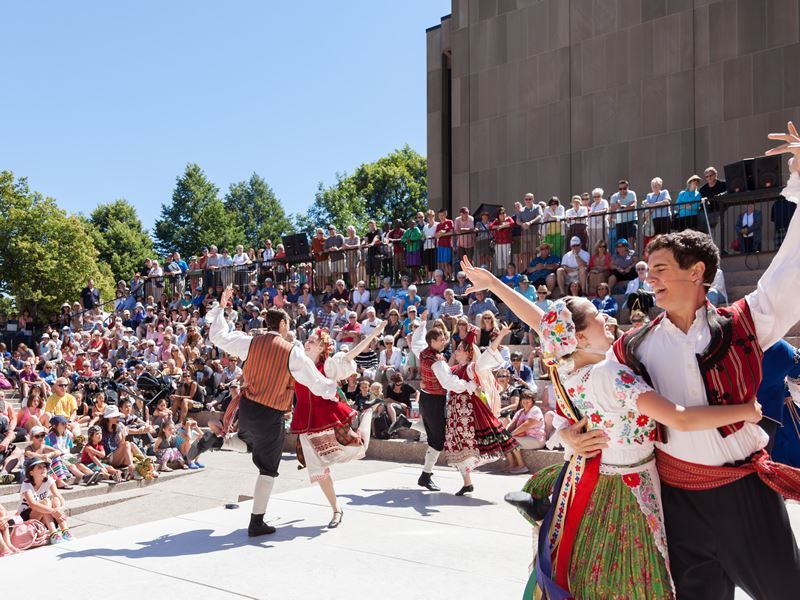 Cavendish Beach Music Festival - Prince Edward Island hosts the annual Cavendish Beach Music Festival, Atlantic Canada’s biggest multiday music festival, every summer. The town of Cavendish can be found on the North Shore of the island, tucked between Stanley Bridge and North Rustico. Beautiful Cavendish beach sits at the gateway of Prince Edward National Park, renowned for its pristine shoreline and spectacular views of the Gulf of Saint Lawrence. It’s the ideal place for a large festival, attendees able to take advantage of multiple attractions before and after the show, including beaches, dining and the famous home of Anne of Green Gables. Tens of thousands of visitors arrive for this three-day country music focused event that’s been named one of the top 100 events on the continent. Just some of the featured artists have included Taylor Swift, Keith Urban, Luke Bryan, Kenny Chesney and Carrie Underwood.

Mutual Festival of Small Halls - One of the most popular festivals of the year, this event takes place in late spring and early summer over two weeks at various churches throughout the island. It’s ideal for those who enjoy acoustic music in an intimate setting with performances primarily focused on folk and gospel music.

Rollo Bay Fiddle Festival - Fiddles and folk music have long been a part of Prince Edward Island’s history, and this mid-summer festival is not-to-be-missed for fiddle enthusiasts and cultural history lovers. The three-day event held in Souris, has included artists like Shane Cook, Vishten and Crissy Crowley.

Island Fringe Festival - Hosted in mid-summer in downtown Charlottetown, the Island Fringe Festival is a unique stage-based festival that features a diverse array of artists in a wide range of categories. It includes everything from storytelling and comedy to theatrical and musical performances, with previous acts including the comedy of DJ Mark McCue and pianist Sarah Hagen.

Cloggeroo Festival - Held every summer in the seaside town of Georgetown, this festival features music from across Atlantic Canada, throughout the country and beyond. It not only includes the widest variety of folk-inspired music imaginable, but everything from soul to salsa, and rock to reggae, along with late night dance parties. A few of its past performers have included the Amanda Jackson Band, the Beck Sisters and Grand Theft Bus.

Highland Games & Scottish Festival - With lots of Scottish descendants in the Atlantic Maritimes, including PEI, this festival is a great way to celebrate Scottish heritage, whether it’s in your blood or not. A fabulous mid-summer event, you can expect lots of Scottish music, including bagpipe bands, as well as highland dancing, food vendors and Scottish-related handcrafted goods and other items available for purchase.

Theatre can be enjoyed throughout Prince Edward Island, with everything from musicals, classic plays and comedies hosted in intimate venues as well as large concert stages.

The Guild/Anne of Green Gables - The Musical. PEI is the land of Anne of Green Gables, the place where Lucy Maud Montgomery’s inspiration came to life. While there are numerous ways to experience it here, seeing the musical is a must. Treat yourself to an unforgettable performance at The Guild in downtown Charlottetown, the island’s not-for-profit arts and culture hub.

Victoria Playhouse - The historic Victoria Playhouse is the longest-running little theatre on the island, located in the picturesque village of Victoria by the Sea. It opened its doors in 1915 and is renowned for its beautiful, intimate interior and outstanding acoustics. It features drama, contemporary comedy and musical concerts.

The Harbourfront Theatre - Located in the waterfront in downtown Summerside, this intimate 520-seat theatre celebrates the culture of the region with musical productions and live drama throughout the summer.

Watermark Theatre - This theatre in North Rustico is known for producing some of the finest professional classical theatre in PEI, featuring great works of European, English and American literature on an intimate stage.

Arts and crafts: Galleries and studios

With so many skilled craftspeople on the island, there are numerous galleries, studios and artisan workshops that can be explored. You can tour workshops and watch the artisans as they work, creating carved masterpieces, handmade soaps, wrought iron, stained glass, sculptures, and paintings. Mills on the island weave creations made from the wool of their very own alpaca and sheep, producing incredible blankets, scarves, sweaters and hats. Shopping any of them is one of the best ways to find that ideal souvenir, bringing home an authentic slice of Prince Edward Island. 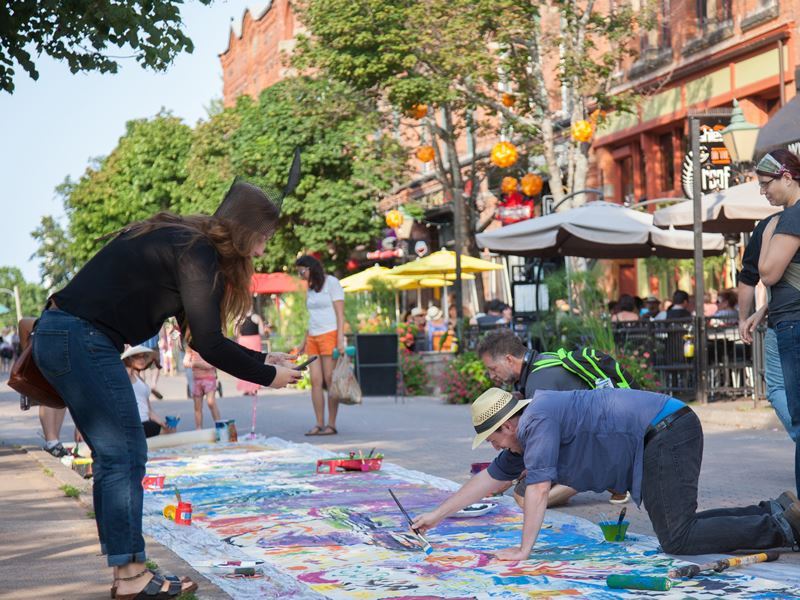 Charlottetown - There are many ways to explore the island’s art in Charlotte Town. Stop by the Confederation Centre Art Gallery which hosts exhibitions that feature the works of Canadian visual artists. A variety of traditional art forms are showcased, incusing painting, sculpture, drawing, photography, printmaking and digital medial presentations. The Confederation Centre of the Arts is a National Memorial to the Fathers of Confederation that’s spread over a block. It showcases the finest in Canadian heritage and performing and visual arts. The Centre hosts an art gallery, musical theatre festival, outdoor performances, walking tours and art camps. 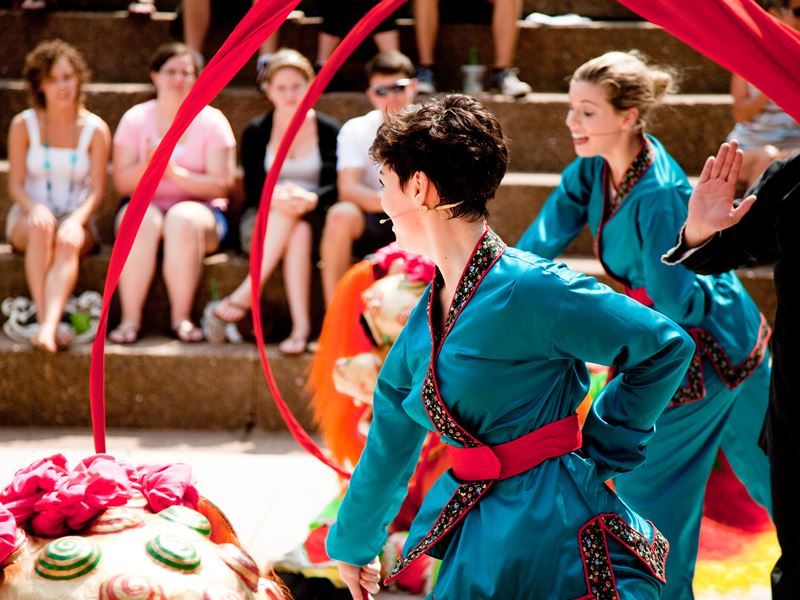 The Lorimer Gallery is a must when exploring Charlottetown’s art scene. Located along historic Victoria Row, it showcases the artistic abilities of local artists specializing in sculpture and painting along with some original Inuit jewelry pieces and exhibits featuring artists who have drawn inspiration from Maritime and Canadian cultures.

The PEI Centre for Craft features the very best works of professional crafts council members that are on display and for sale. It includes jewelry, woodwork, paintings, fine pottery glassworks, textiles, photography and more. McCaskill’s Fine Craft Studio features more than 50 artisans from around the island. You can shop for art, prints, glass, metal, pottery, jewellery, art and wood works and even design and turn your own pen on a wood lathe as part of the ‘What Wood You Make’ experience.

Other notable studios and galleries in PEI - In Brackley Beach, the Dunes Studio Art Gallery is set around magnificent garden grounds and features the exquisite award-winning pottery of Peter and Joel along the paintings and prints by local artists, gold jewelry by Eve Llyndorah and Canadian crafts by some 50 contributing artists. From 1 June to 15 October each year, the Fine Crafts Gallery of Gaudreau Woodworking presents an excusive collection of the finest crafts from throughout Atlantic Canada. The works of 30 potteries are features along with works by resident artisan Diane Gaudreau that are created by hand in a woodworking studio here.

PettyQuilt Junction in Long River is a working studio that produces a wide range of contemporary and traditional quilts, open year-round by appointment. Artisans on Main in the heart of Souris is operated by talented local artists who create and sell high-quality handmade products, including jewellery, pottery, weaving, textiles, fibre, woodwork and more. Visitors can chat with the arts and watch them at work. The family-owned MacAuslands Woolen Mills crafts gorgeous wool blankets and wool run on the island since 1932. The only mill in Atlantic Canada that still produces traditional woolen blankets made with 100% virgin wool yarn, it’s open to the public who can purchase both blankets and yarn.

In addition to attending one of the many festivals on PEI, there are many other ways to enjoy music on the island. The vibrant music scene includes live acts in a wide array of intimate and other-worldly settings. 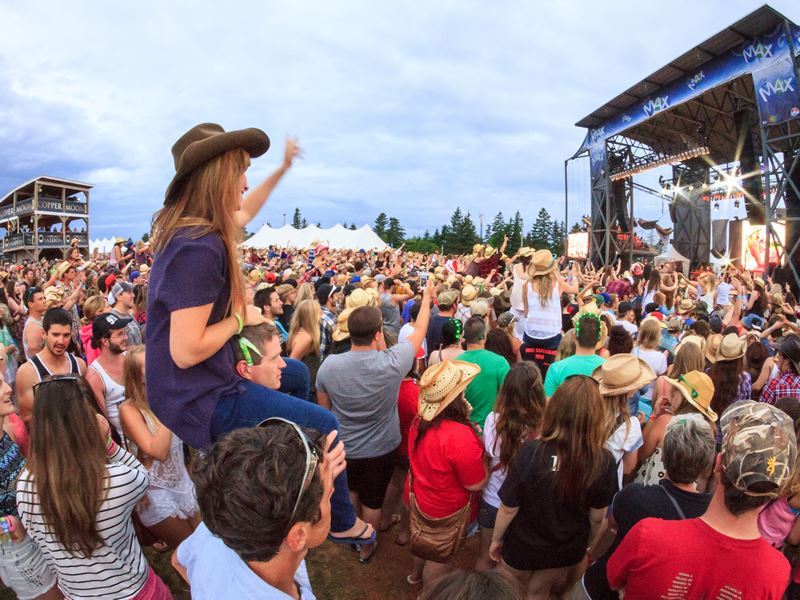 In Charlottetown on a Friday night, enjoy Ceildh at the Irish Hall, which often hosts Acadian and Scottish fiddlers along with Irish musicians. On Saturday nights, the Olde Dublin Pub is the place to be in the capital city, where musicians from throughout the Maritimes perform. The Trailside Music Café offers an intimate experience in a timeless venue, a restored 1937 barn-like structure. A variety of performances can be enjoyed throughout the year.

In Summerside at the College of Piping, renowned around the world for its piping, drumming and Celtic dancing instruction, tours and concerts are hosted daily. Through the summer in Kensington, take in ceilidh with the Long River Players, including Celtic and folk music as well as step dancers.

Self-Drive A Taste of the Maritimes