This unforgettable self-drive follows a circular route on spectacular Vancouver Island, the largest island off North America’s west coast. In this lush nature and wildlife lovers’ paradise, you’ll have the opportunity to take part in a wide range of outdoor adventure surrounded by scenery that includes everything from soaring mountains and rainforest to driftwood-strewn beaches and hot springs. City delights await too, in British Columbia’s beautiful capital of Victoria. 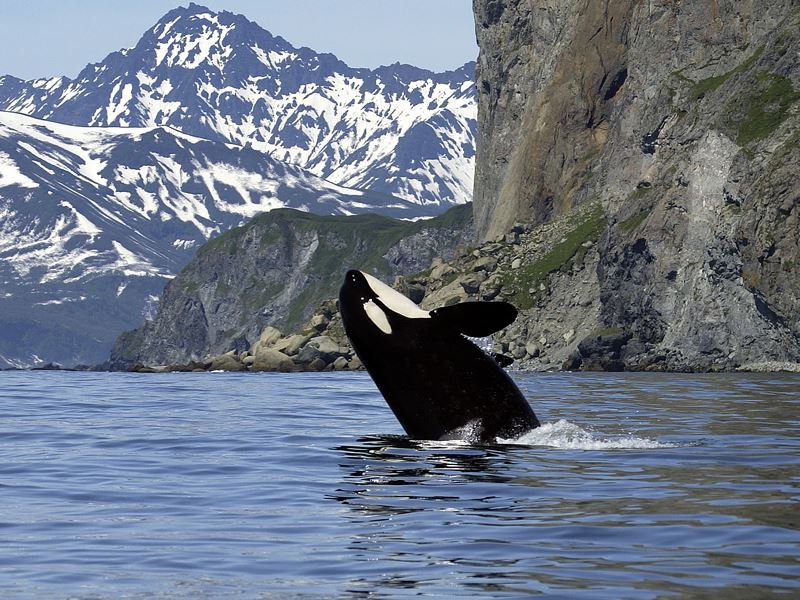 Begin your road trip in Victoria, renowned for its outstanding food scene, and you can sample of the best in the picturesque Inner Harbour. There are a number of eateries with outdoor patios for enjoying alfresco meals, including wonderfully fresh seafood like sockeye salmon, halibut and oysters. This is also a popular spot for cocktails, music and dancing. Stick around for at least a day or two if you can and embark on a boat cruise around the harbour or a whale watching tour. Between March and October, thousands of whales, including humpbacks and orca whales, migrate through the waters that surround the island. Visiting in the summer, you won’t want to miss Butchart Gardens either, this is the season when the Rose Garden is in full bloom, and there are some 700 plant varieties that can be viewed here in total. On Saturday nights, the garden puts on a dazzling firework display too.

If you like museums, the city is jam-packed with them. The Royal BC Museum is a top pick, considered one of the best in the country. It focuses on both human and natural history with around seven million artefacts. The Modern History gallery hosts a must-visit authentic frontier town while the Natural History gallery showcases exhibits on the province’s coastal and rainforest ecosystems from the ice age through today. In the First Peoples gallery you’ll find cultural treasures, totems and masks. 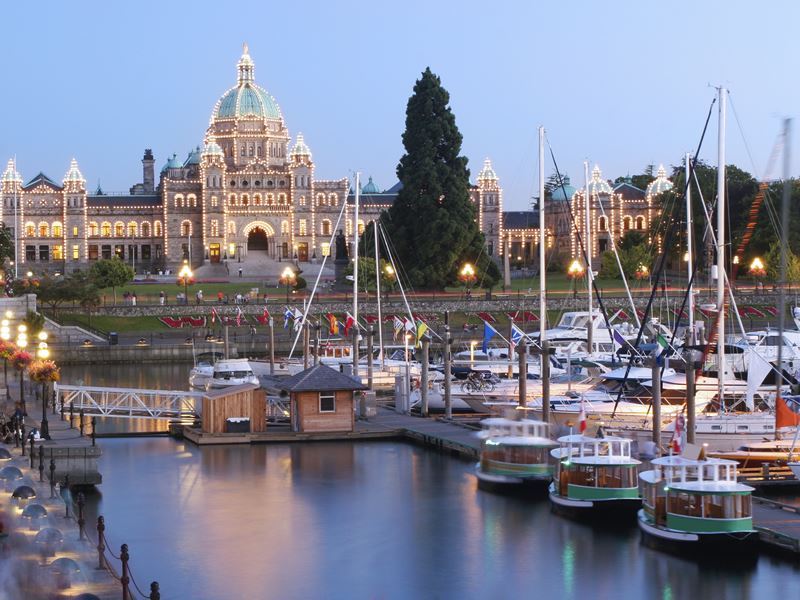 Follow the Trans-Canada Highway towards Sooke, detouring to visit Sooke Potholes Provincial Park, known for a unique rock formation that formed during the last ice age. There are a series of tranquil, deep rock pools that are ideal for a cool refreshing dip, along with short walking trails that wind through the forest. Base yourself in Sooke and you’ll find plenty of things to do. Take a stroll on the Government Wharf to watch the fishing boats come in or even buy fresh seafood right from the fishermen. Tugwell Creek Honey Farm and Meadery is nearby and produces hand-crafted meads made from its own Wildflower Honey. It features a tasting room, museum and gift shop. Just a short drive from here is French Beach Provincial Park which lies along the Strait of Juan de Fuca with the territory of the T’Sou-ke First Nation. Here, meandering trails lead through the forest and there’s also a gravelly beach for swimming and picnicking. Wildlife is abundant, with bald eagles and ospreys frequently soaring overhead while sea lions, seals and otters splash around in the water. This is a popular spot for whale watching too, including migrating gray whales and orcas. 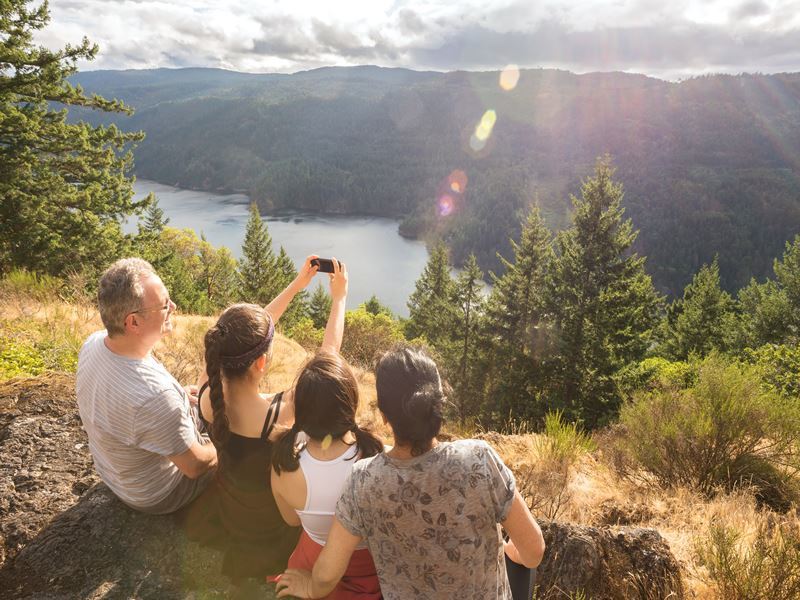 Working your way around to the east side of the island towards the town of Parksville, stop at the North Island Recovery Centre. It’s a great place for close encounters with B.C. wildlife, with the opportunity to visit rescued eagles, falcons, owls, black bears and more. The centre is a rehab facility, and it also hosts a Discovery Centre that can be toured along with a gift shop. Rathtrevor Beach Provincial Park in Parksville hosts five kilometres of sandy beach, and at low tide the water recedes nearly a kilometre from the shoreline making it ideal for searching through tide pools for colourful marine creatures like starfish, sea anemones and hermit crabs. Yet another beautiful park to visit nearby is Englishman River Falls Provincial Park. It’s named for the two gorgeous waterfalls here that are set among lush forest and offers a number of hiking trails that run alongside the river and through the trees. In the summer, the lower falls end in a deep pool with crystal-clear cool waters that area ideal for swimming. 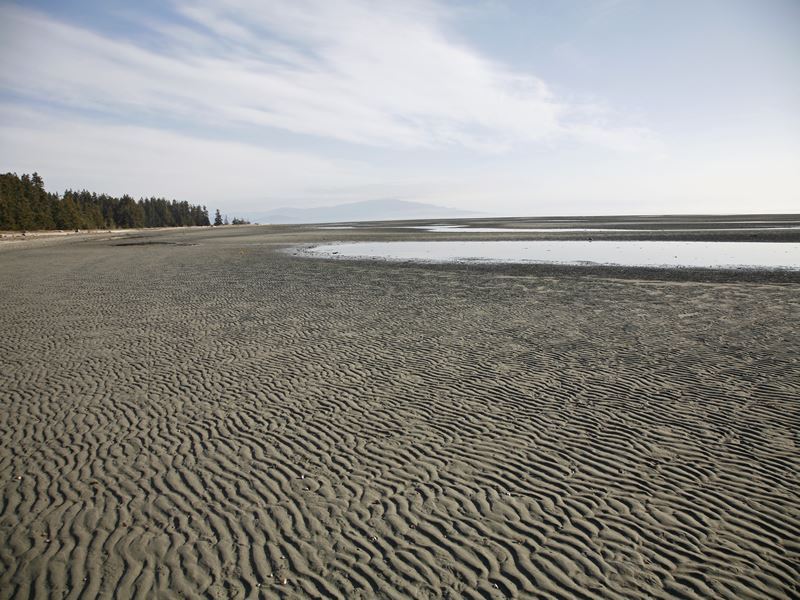 Travel west, crossing the island to Tofino, located in Pacific Rim National Park. This is one of the most enchanting coastal towns in British Columbia, and Canada’s only surfing destination. It serves as a hub for the long series of beaches along the island’s west coast and a popular gateway for a wide range of activities. The town is home to multiple restaurants for feasting on mouth-wateringly fresh seafood, perfectly complemented with the locally-made seaweed beer.

Wild and remote, visitors can join boat excursions into the protected bays of Clayoquot Sound where gray, orca and humpback whales can often be seeing passing along the shoreline, along with a wealth of other marine life, and even black bears that come to feed on shellfish. The park itself is made up of three distinct units, the West Coast Trail, Long Beach and the Broken Group Islands. Each unit offers something unique of its own – Long Beach boasts a 16-kilometre stretch of coastline, the longest span of sandy beach on the west coast, backed by rainforest and mountains. It’s popular for surfing, beach combing, building sandcastles, kayaking and peaceful strolls. You might want to drive up to Hot Springs Cove where a short hike will lead you to Hot Springs Cove, ideal for a dip in the waters that are bathwater warm.

In the nearby town of Ucluelet, you can browse independent shops selling First Nations jewelry and carvings, Murano glass and more. 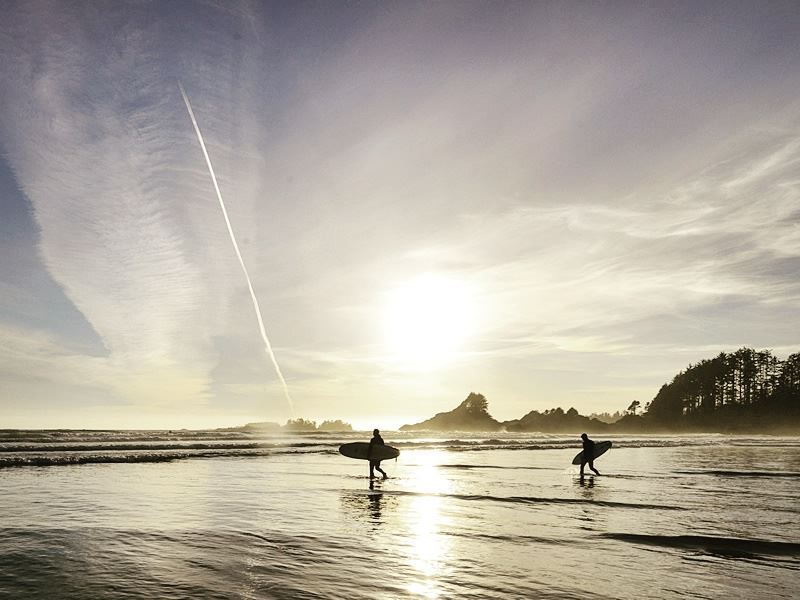 Journey back to the east coast and the town of Campbell River known as the ‘Salmon Capital of the World.’ Delve into the area’s rich fishing history by visiting the Maritime Heritage Centre which features a full-restored table seiner that was made famous on the five-dollar Canadian bill in the 1970s. Today it’s a national historic site and you can even hop aboard to explore it. There is also a good collection of maritime artefacts ranging from model ships to Navy items. The Campbell River Art Gallery hosts contemporary works of art created by professional artists from across the country, while the Museum at Campbell River showcases contemporary exhibits of First Nations cultures.

You can witness some of the area’s famous salmon by visiting the Quinsam Hatchery, one of the largest salmon rearing facilities in Canada. The highlight is the fish floor inside the interpretive centre which covers a re-creation of rivers nearby, complete with trout, salmon and other native aquatic species. A number of excursions can be enjoyed from here as well, from rafting tours where you can see the salmon in the wild and even snorkel with them, to tours into Bute Inlet that will bring you to viewing platforms to watch the bears that are attracted by the abundance of spawning salmon between August and October. Elk Falls Provincial Park is a popular place for a hike, featuring a suspension bridge and scenic trails that will bring you to a number of waterfalls. 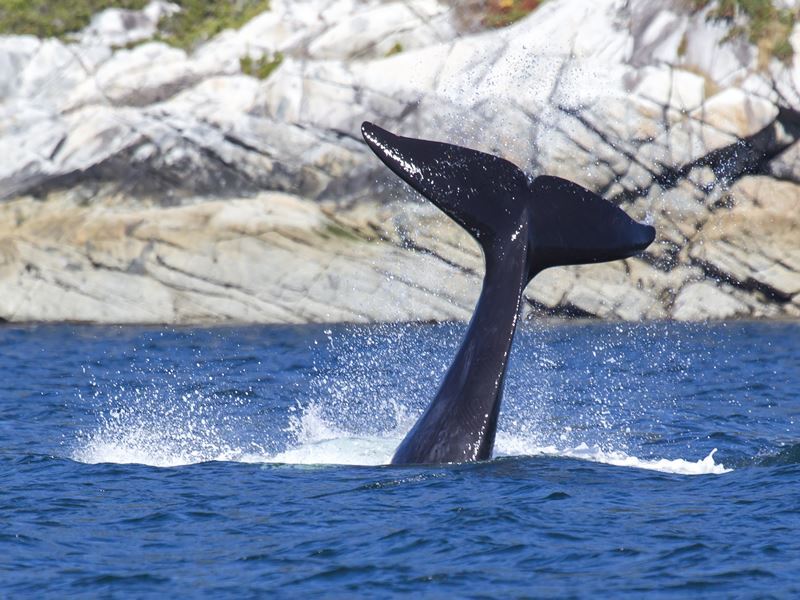 Continue further north along the east coast to the tiny town of Telegraph Cove, immersed in the remote wilderness. It enjoys a postcard-perfect waterfront setting with a cluster of multi-coloured buildings and homes hugging the rocky shoreline. Just a century or so ago, the only thing here was a one-room telegraph shack that was used by the early pioneers, fishermen and loggers to allow them to keep in touch with the outside world. Eventually, a general store, school, sawmill and fish saltery was added, with many of the historic buildings constructed right above the water on stilts, linked by a boardwalk. This is one of the world’s prime spots for watching orca whales, with one of the highest concentrations of the magnificent animals on the planet. There are around 250 Northern Resident orcas here and there are multiple ways to see them. You can join a kayak tour, paddling right alongside them, or embark on a whale watching boat tour. They can sometimes be seen right from shore too. In addition to orcas, you’ll see plenty of bald eagles that also like to feast on the abundant fish, and possibly sea lions, dolphins and humpback whales. 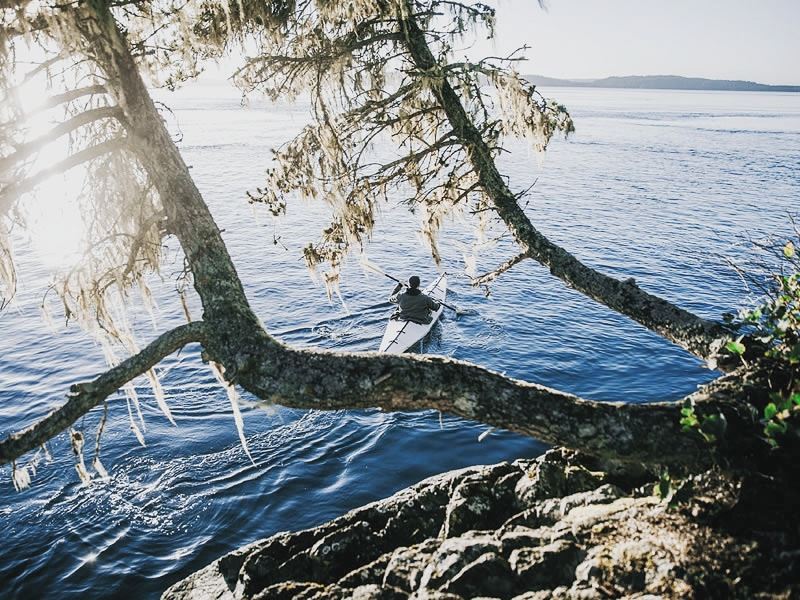 Enjoy a relaxing scenic drive south to Vancouver Island’s second largest city, Nanaimo. Along the way you might want to stop in Coombs to check out the Coombs Old Country Market. It’s particularly unique in that there are goats that hang out on its roof, making it popular for selfies. You can also grab an ice cream, treats or local produce from the general store. Nanaimo has an increasingly popular food scene – you might want to enjoy dinner at Riso Foods followed by an evening out at The Vault Café, a perfect place to mingle with the locals while sipping brews and enjoying live music.

Before making your return to Victoria, stretch your legs along the Harbour Front Walkway which follows the Newcastle Channel and downtown waterfront. You can continue to Maffeo Sutton Park, the city’s most popular, passing a number of trendy shops, popping into a few for gifts or souvenirs along the way. If you’re in the mood for a swim, the park hosts a saltwater swimming lagoon that’s sure to get you energized for your drive. But if you don’t want to get wet, there are some great coffee shops in town like Regard Coffee Roasters which is sure to do the trick. 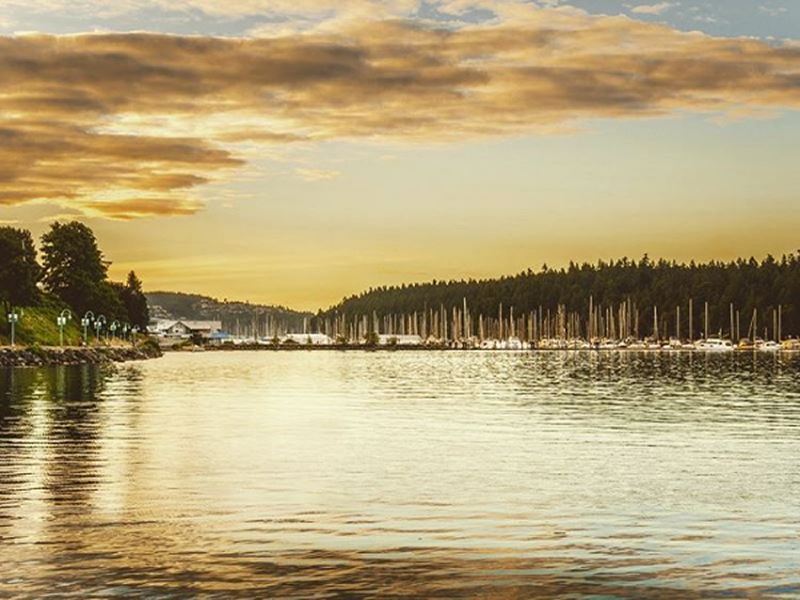 Back in Victoria, with so much to see and do, you’ll want to spend at least another day here before ending your B.C. travels. If you didn’t have time to explore the top museums like the Royal BC Museum or beautiful Butchart Gardens, now is the perfect time to do it. Or, take a tour of the Parliament Buildings on the Inner Harbour with their stunning domes, turrets and stained glass. Free tours are available that allow you to witness the place where the province’s elected representatives debate and pass laws, learn about its history and parliamentary process.

Beacon Hill Park is a locals’ favourite, located along the shores of Juan de Fuca Strait offering jaw-dropping views from every vantage point. It also hosts miniature golf, a water park and a petting zoo.

With the city of Vancouver just a ferry ride away, you could easily cross the water to enjoy its many delights, from world-class dining, shopping and cultural attractions to lush parks and beaches, and then fly home from there.