It’s often said that Toronto is a city defined by its neighbourhoods, each one possessing a distinct feel that contributes to a truly eclectic and culturally diverse whole. One area that is particularly distinctive and which has fast become a popular haunt with locals and tourists alike is the historical Distillery District. Located in Toronto’s downtown east, a short hop from the central business district and Lake Ontario, this bustling neighbourhood is a must-visit for those eager to explore the vibrant “urban villages” that make this city famous. 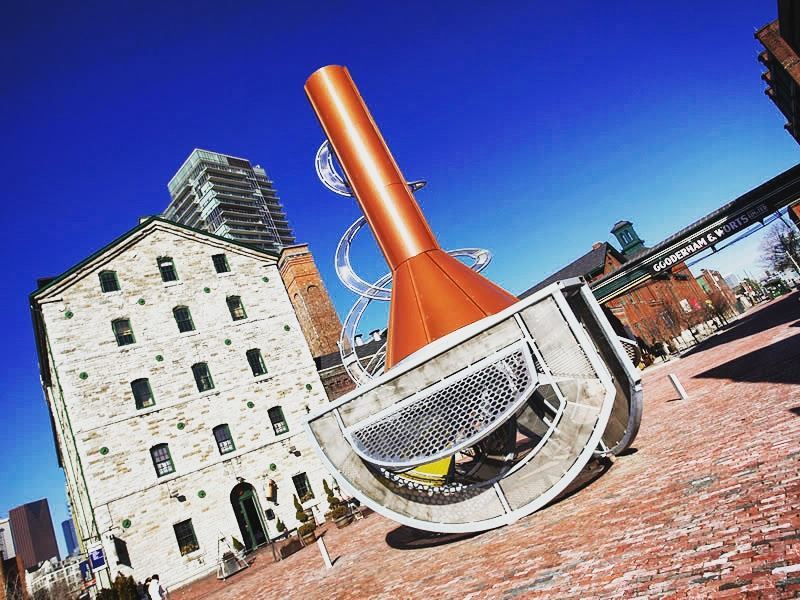 Less than two decades ago the Distillery District was an abandoned and derelict industrial site, popular only with film crews. But now this former Victorian-era distillery has been transformed into a beautifully restored pedestrian-only enclave that effortlessly blends old world charm with twenty-first century dynamism. Spanning five hectares and containing forty-seven exquisitely refurbished buildings along with ten interlinking streets, it makes up the largest and best-preserved collection of Victorian industrial architecture in North America. 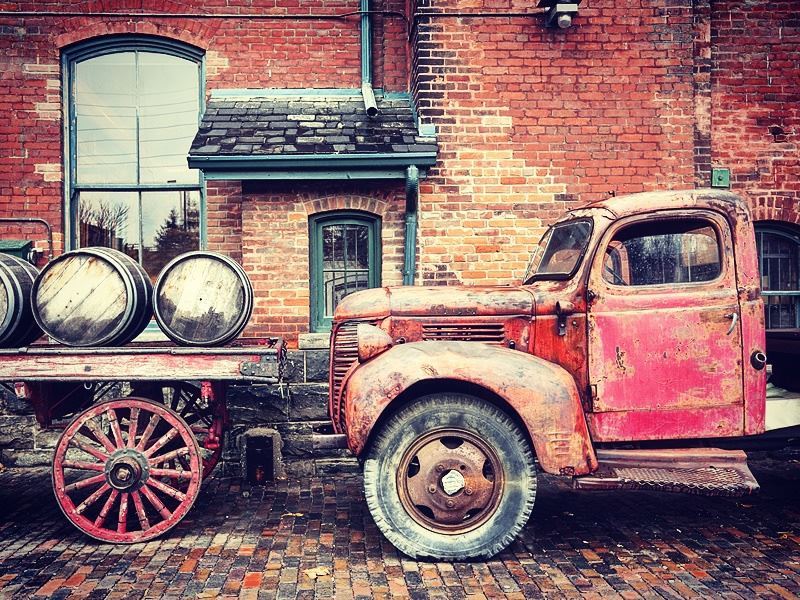 The district’s developers strived to create a neighbourhood with a truly unique vibe, one that fuses the relaxed and quaint feel of many European towns along with contemporary design and the unmistakable air of creativity that characterises places such as New York’s SoHo. Spaces were let exclusively to independent businesses, as well as to creative tenants working in the visual arts, fashion, design and drama. The result is an area which now boasts some of Toronto’s hottest boutiques, artisan shops, restaurants, galleries and performance venues, and one that has fast blossomed into one of Canada’s most happening hubs for art, culture and entertainment.

Toronto’s Distillery District was formerly home to the hugely successful Gooderham & Worts which during its heyday was the largest distillery in the world. Founded in 1832, business reached its peak in the 1860s when over 2 million gallons of whiskey and spirits were being produced each year. However, business slowed over the coming decades with production finally ceasing in 1990 causing the factory and surrounding area to fall into disuse. At the turn of the century, Cityscape purchased the land and soon unveiled over 40 perfectly restored industrial warehouses that quickly gave rise to one of Toronto’s hippest new neighbourhoods.

Admiring the authentic red-brick facades, strolling along the wide alleys and winding cobblestone streets, and with not a single car in sight, spending a day in the Distillery District is like stepping back into a by-gone era. A palpable sense of history pervades every street corner, and upon entering the buildings the sheer scale of the renovation project unveils itself in full force. Stores, restaurants and galleries are decked out with soaring ceilings, rustic post-and-beam finishes, exposed brickwork and huge windows that bathe interiors in natural light.

If you’re interested in gaining a deeper insight into the area’s industrial past, there are plenty of worthwhile tours to choose from. Hour-long walking tours with knowledgeable guides run every day of the week. Or you can book a Segway tour for a 30-minute whirlwind trip around the district’s notable landmarks. The Distillery District has also long been considered a haunted site and there are several intriguing ghost tours available for those who fancy delving into its paranormal underworld. If you prefer to explore at your own pace, download an informative self-guided tour from the Distillery Heritage website for a fantastic overview of the area’s major architectural features and heritage exhibits. 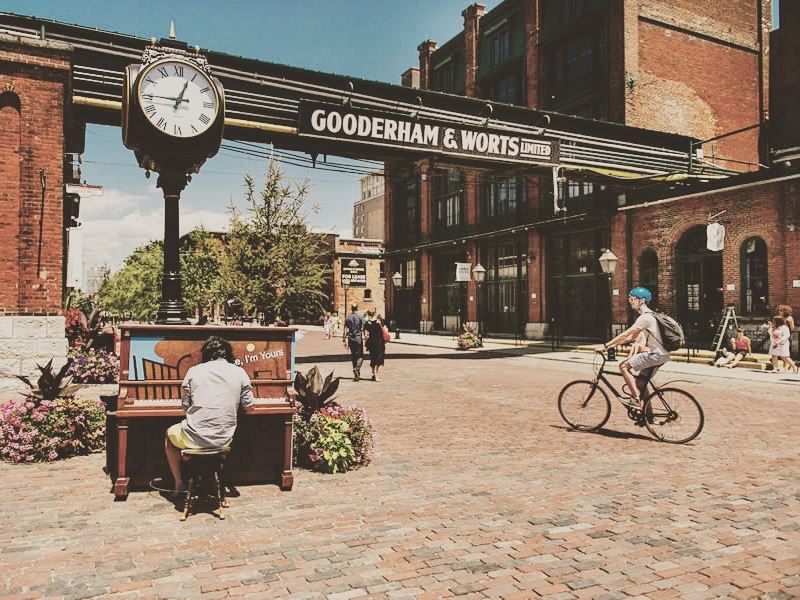 Beyond the historical and architectural delights, the Distillery District is also a mecca for arty types. A lot of effort was invested in attracting many of the city’s most talented creatives to the area, including artists, performers, designers and manufacturers with an artisanal focus. The result is a veritable feast for the senses that’s guaranteed to get your creative juices flowing.

The neighbourhood boasts around 20 art galleries, including Arta Gallery, Eskimo Art Gallery, Pitko, and Thompson Landry Gallery, all of which are well worth a visit. In particular, be sure not to miss Corkin Gallery, one of Canada’s most celebrated visual art spaces, where you’ll find exhibits by internationally-acclaimed contemporary artists housed in an impressive space. The Distillery District is also home to several performing arts theatres, including The Young Centre, where you’ll find endless opportunities to sample the best theatre, dance, poetry and live music Toronto has to offer.

Beyond the galleries and theatres, you can pop into artist’s studios, photograph the numerous unusual sculptures that line the streets (such as the 40-foot Spider Sculpture or the Love Installation) and browse any number of original stores to pick up high-end artwork or some one-of-a-kind homeware. 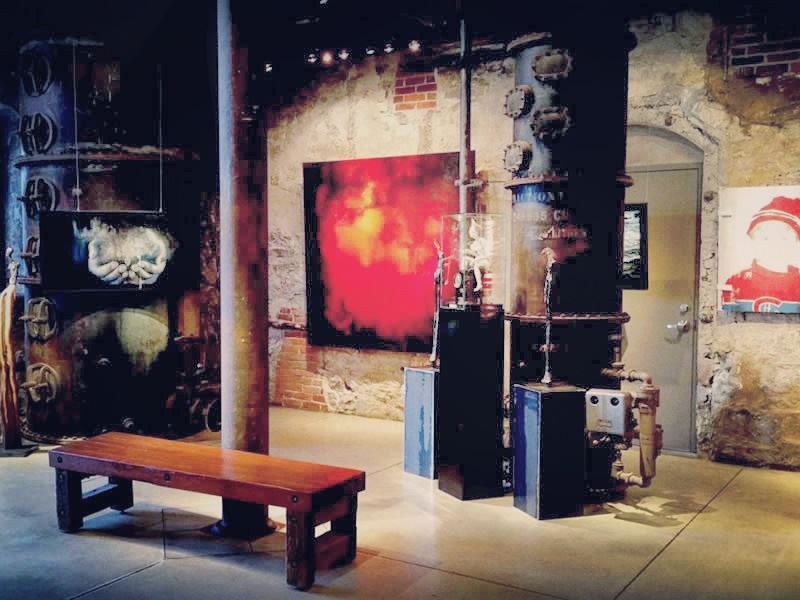 After taking in your fill of historic and cultural attractions, refuel at one of the neighbourhood’s tempting cafes or restaurants. Home to dozens of mouth-watering eateries, many of them award-winning, there’s enough here to satisfy even the most discerning of foodies.

A popular choice for a sit down meal is El Catrin, a Mexican restaurant recently named one of the Top 100 Outdoor Dining Restaurants in all of Canada. Led by one of Mexico City’s top chefs it serves up an authentic and delicious tapas style menu. The surroundings and ambience alone are reason enough to visit, including an impressive art mural, large heated patio and the country’s largest tequila bar.

If you’re craving something sweet, a stop at legendary chocolate makers Soma is a must. At this artisan chocolatier the produce is carefully crafted directly from raw, organic and Fairtrade ingredients in their unique cocoa bean factory. They sell everything from pralines and truffles, to cookies and gelato, as well sumptuous hot chocolate mixes that receive regular rave reviews.

The neighbourhood’s other popular venues include Tappo Wine Bar and Restaurant for quality Italian fare, French-style bistro Cluny, and Greg’s Ice Cream for dessert which boasts over 100 flavours, including many offbeat varieties like coffee toffee and roasted marshmallow. 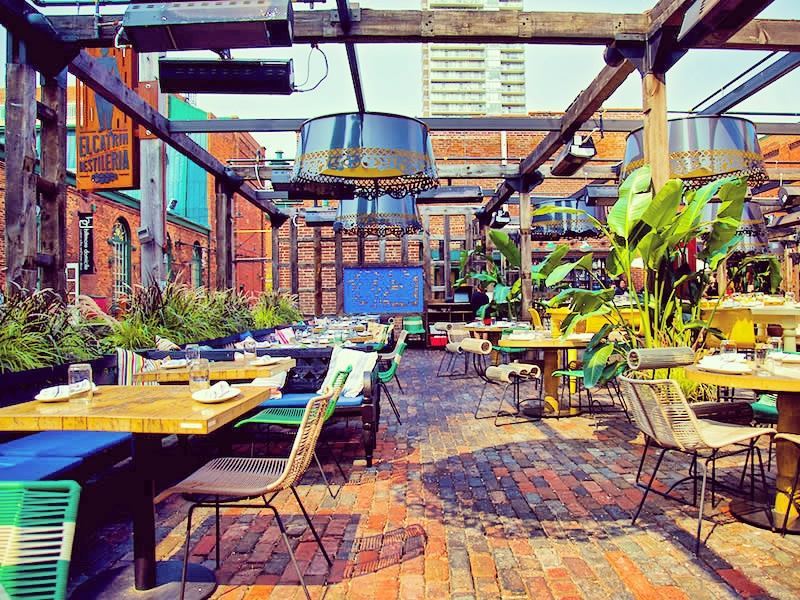 If you’re interested in learning more about the district’s industrial heyday and the whiskey production process, head over to the Artscape building where you can admire preserved remnants from the factory’s interior, including a twisty whiskey slide that was used to manoeuvre bottles. For a taste of the real thing, a stop by the award-winning Mill Street Brewery is a definite highlight of any visit. Housed in the original Gooderham & Worts tankhouse, this pub serves excellent food along with craft beer made on site in its acclaimed microbrewery. Enjoy some quality seasonal brews with friends amidst the impressive industrial architecture or take the opportunity to witness the brewing process first hand on one of the daily tours.

Ensuring that the district continues to live up to its namesake, another brewery has recently opened up on site - the Ontario Spring Water Sake Company. Browse the wide variety of bottles for sale, savour a locally-brewed cocktail at the bar, or sign up for a tour to learn more about the distilling process and partake in some sake tastings. If you prefer something non-alcoholic, Parisian-style Balzac’s Coffee Roasters is another firm favourite. While you’re there, be sure to admire the soaring two-storey belle-époque interior and spend some time soaking up the district’s charming atmosphere on the popular outdoor patio. 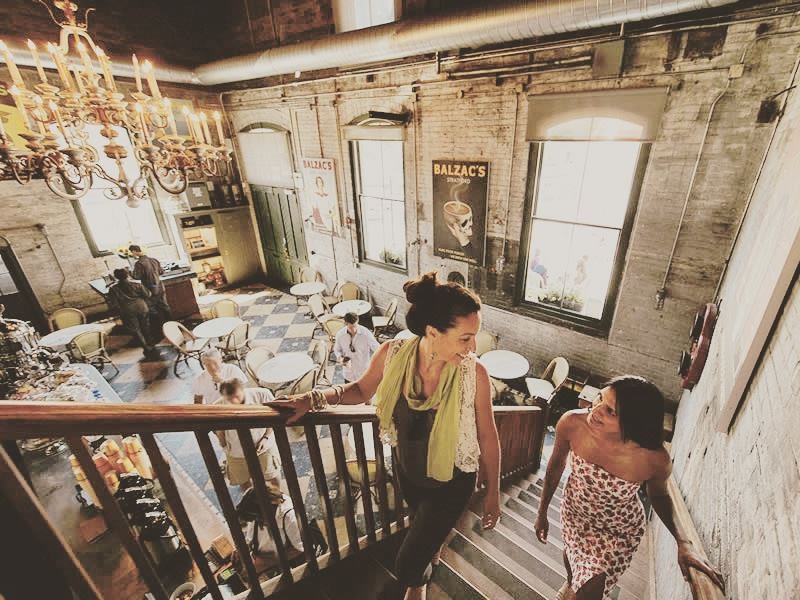 If you’re looking to experience the Distillery District at its very best, then time your visit to coincide with any one of the numerous exciting events that are hosted throughout the year. The summer months are a particularly great time to visit: the area bustles with even more life than usual as crowds flock to enjoy the sunny patios, live music, theatrical performances and outdoor exhibitions. Acclaimed events include Artsfest, the Contact Festival (a photography showcase), and Luminato (a celebration of theatre, music, food, film and art). Every Sunday during the summer, the district also plays host to a colourful farmer’s market which overflows with fresh produce, flowers and artisanal delights. Alternatively, if you’re visiting in late November or December you won’t want to miss Toronto’s magical Christmas Market, one of the world’s best holiday markets that sets up shop in the district every year.

However you choose to spend your time, whether its sampling quality craft brew, taking in the latest art installation or diving into one-of-a-kind artisanal stores, exploring the trendy Distillery District is simply a must-do on any Toronto trip.