A self-drive tour is the perfect way to explore two of Canada’s most striking maritime provinces: Nova Scotia with its endless sweeping coastlines and rich heritage and the stunning Prince Edward Island. These destinations can be seamlessly combined in a memorable loop taking in some of the very best natural, historic and culinary experiences East Canada has to offer. 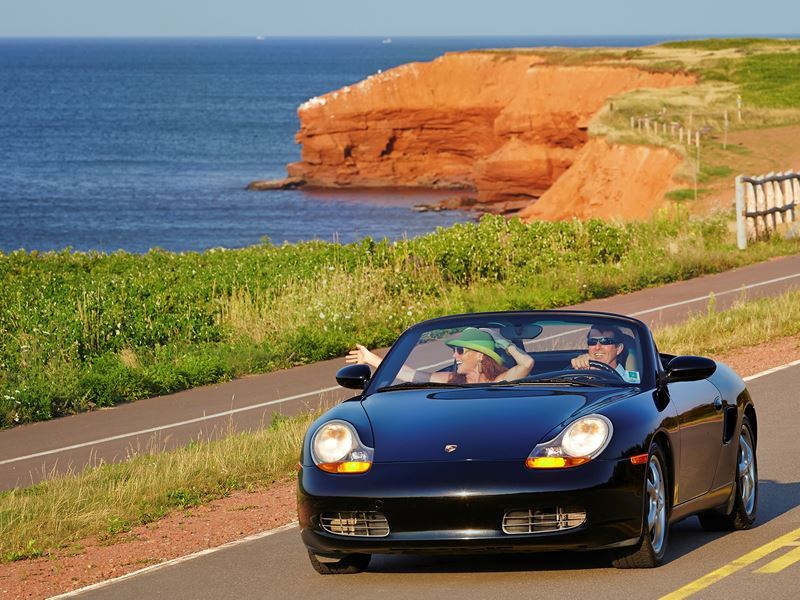 Whilst primarily known for its spectacular coastal scenery and maritime experiences, Atlantic Canada harbours it’s fair share of exciting urban attractions as well. Top of the list should be Halifax, Nova Scotia’s capital and a great hub to start or end your exploration of the wider region. Before launching out on a road trip it’s well worth spending a day or two getting to grips with this city which effortlessly blends historic charm with a hip youthful vibe. Defined by its oceanfront location, Halifax features an attractive waterfront peppered with charming heritage buildings, fascinating museums, unique artisan shops and a lovely boardwalk area that’s ideal for taking in the fresh sea air and admiring the impressive ships on a leisurely stroll. The city also harbours thriving arts, culinary and entertainment scenes, with an abundance of restaurants, craft brew pubs (more than any place per capita in Canada), theatres, live music events and festivals to feast your senses on. 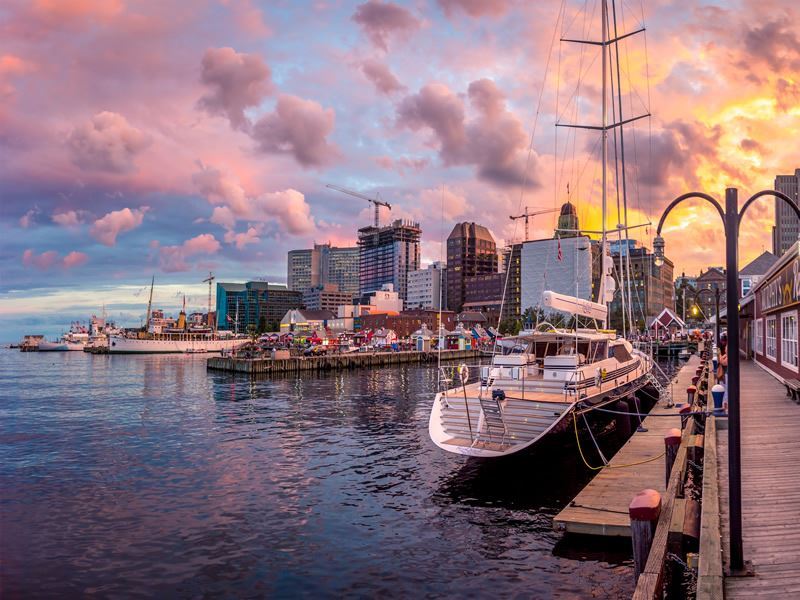 Occupying a good portion of Nova Scotia’s northern coast is the famed Bay of Fundy, home to the world’s most dramatic tidal range, along with an enthralling mix of sandstone cliffs, wide sandy beaches and picturesque islands. Twice a day, over 160 billion tonnes of water flow in and out of the bay providing dramatically differing perspectives on the coastal landscape with its vast tidal flats, spectacular sea stacks and towering cliffs. Not-to-be-missed natural highlights along the coast include Hopewell Rocks, Cape Enrage, Cape Split and the Fundy Trail Parkway. Hiking and beachcombing are some of the best ways to admire the scene, whilst bird-watching is popular in the mid-summer migratory season. If you’re feeling adventurous, rent a kayak to gain a unique perspective on the ever-changing coastal landscape from the water. Fundy is also one of the best places in the province for whale watching. Between the spring and autumn you can expect to see humpback, mink and even the rare right whale. Join a guided boat excursion to witness this awe-inspiring spectacle, and be sure to keep your eyes peeled for seals, porpoises and seabirds too. Fundy isn’t all about the beaches, cliffs and ocean, the area is also home to a number of memorable historic sites such as the Annapolis Royal Area, Fort Edward National Historic Site and the Grand Pré National Historic Site. Moreover, just inland lies a lush backcountry that merits exploration, with forests rich in life, over 120 km of hiking trails and several fantastic family-friendly campgrounds. 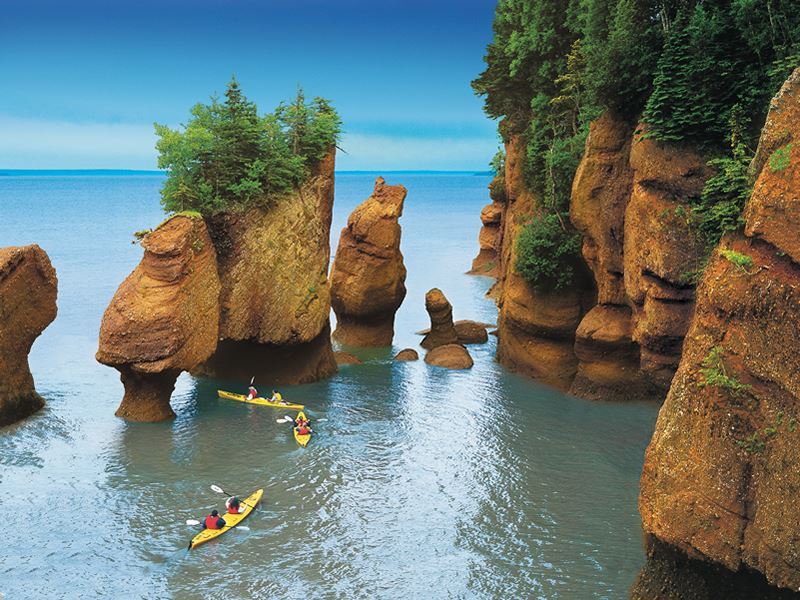 You can’t tour Nova Scotia’s spectacular coastline without making a stop at some of its 160 historic lighthouses. In fact, it’s possible to tailor an entire road trip around lighthouse visits alone, especially around South Shore where you’ll find most of the province’s best-loved examples. These heritage sites remain an important testament to Nova Scotia’s proud maritime tradition and many are open to the public, sometimes providing guided tours that offer a deeper insight into the turbulent histories and inner workings of these shining beacons. Highlights include Sambro Lighthouse in Halifax (the oldest working lighthouse on the continent), Peggy’s Cove lightstation (the most photographed in the province) and the towering Louisberg lighthouse in Cape Breton. If you’re heading South Shore, make your way along the Lighthouse Route which promises not only plenty of lovely lighthouses but sweeping ocean views, hiking trails and some memorable picnic spots as well. 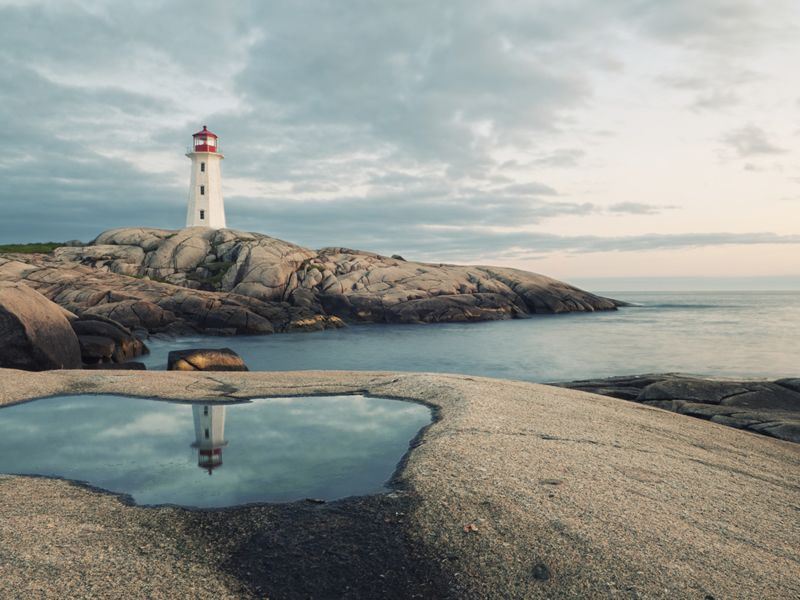 Other delights along Nova Scotia’s coast include some of the best beaches in all of Canada, along with some fantastic nature reserves, historic sites and charming seaside settlements that continue to boast a proud Celtic and Acadian heritage. Along the Western Shore, consider making a stop at Mahone Bay, a scenic town home to a number of interesting boutiques and eateries, as well as an attractive harbour. It’s protected by a tranquil bay popular with boaters and paddlers and within easy reach of several off-shore islands such as Oak Island and Tancook Island, two popular hiking and whale-watching destinations. Old town Luneburg, a UNESCO world heritage site situated on the South Shore, is a definite must for history-buffs. Wander through narrow atmospheric streets, admire colourful heritage buildings along the waterfront and don’t miss visits to the Bluenose II sailing ship and the Fisheries Museum of the Atlantic to learn more about the region’s maritime history. 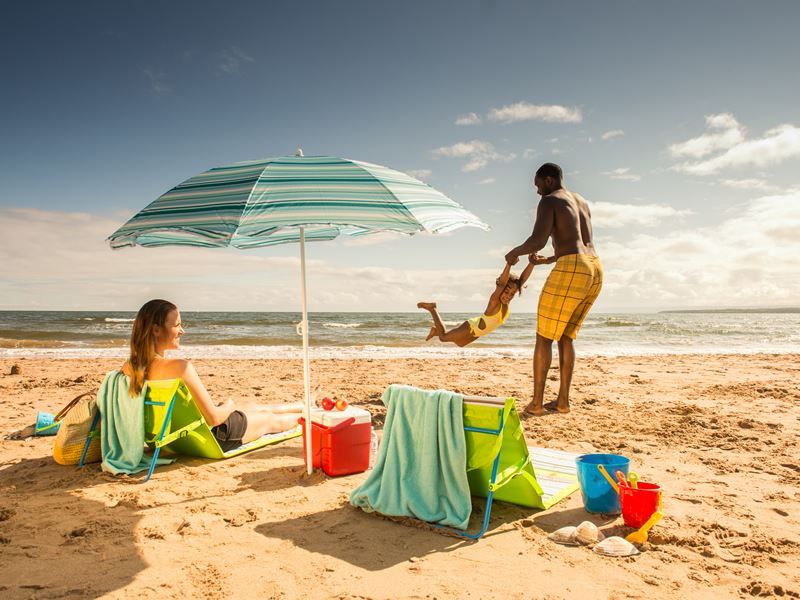 Nova Scotia is home to two national parks: the wild and wonderful Kejimkujik National Park & Historic Site and the fabulous Cape Breton, voted the number one island destination in North America. A visit to Kejimkujik (or Keji for short) will take you right into the heart of Nova Scotia, into a land of thick forests, sparkling lakes, abundant wildlife and endless outdoor adventure. Active types can make the most of plentiful hiking opportunities along the park’s expansive and well-maintained trails. Scale rounded glacial hills for sweeping views and expect some incredible wildlife sightings along the way, from black bears, beavers and bobcats, to deer, loons and owls. From Kejimkujik Lake, numerous canoe/kayak provide yet more opportunity to venture deeper into the wilderness. Numerous connecting waterways deliver you to idyllic island-dotted lakes perfect for fishing, picnicking and swimming. Kejimkujik is also a designated historic site and the ancient home of the Mi’kmaq people. Paddle historic routes, admire intricate age-old petroglyphs carved into the rocks and immerse yourself in fascinating First People culture around the campfire.

Cape Breton Highlands National Park harbours some of the most breath-taking coastal scenery in the region. The famed Cabot Trail is rated as one of the most scenic drives Canada and one definitely not to be missed. Meander past lochs and glens, soak in stunning sea views from wind-swept headlands and stop by sandy beaches, sleepy settlements and artisanal workshops enroute. You can take a boat tour to gain a different perspective on the coastline and get up close and personal with some of the Cape’s iconic wildlife – whales, seals, dolphins, eagles, seabirds and many more captivating species. Alternatively, venture further inland into forests streaked with rivers and cascading waterfalls. Make your way up lofty granite plateaus boasting panoramic lookouts over wild areas home to bear, moose, and Canadian lynx. Opportunities for adventure, recreation and relaxation abound, whether it be hiking, paddling, cycling, golfing, swimming or fishing – it can all be done here. The stunning 4-mile Skyline Trail is especially recommended for its splendid sea views and unique wildlife encounters. 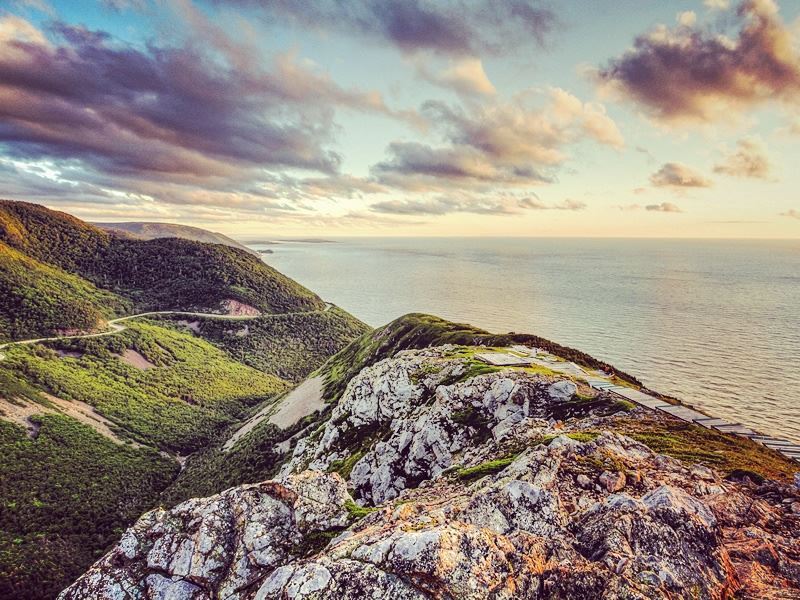 A province unto itself, Canada’s enchanting Prince Edward Island offers visitors an intoxicating mix of pristine white sand beaches, bucolic countryside and fantastic heritage, culture and hospitality – all of which is ideal for exploring on four wheels at your own pace. The island is home to a National Park divided into three distinct zones spanning 40km along the impressive Gulf of Lawrence shore. Expect to find endless sands, wind-sculpted dunes, red sandstone cliffs and plenty of opportunities for swimming, surfing and general beachside fun. For history and literary buffs, the park is also renowned as the place where Lucy Maud Montgomery penned her bestseller Anne of Green Gables, one of Canada’s most popular novels that was inspired by the island’s captivating scenery and charm. Interpretive programs, guided trail tours and campfire presentations help you get the most out of this incredible natural and historic setting. Outside the park itself, tranquil backroads meander past rolling hill and quaint farmsteads, interspersed with charming traditional villages, whilst a stop in the provincial capital, Charlottetown, promises plenty of shopping, dining and cultural attractions. 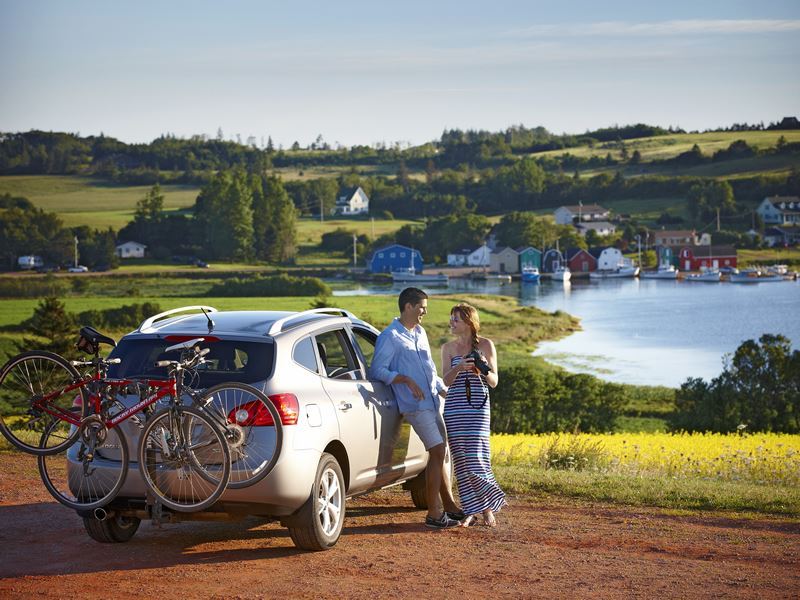 Incredibly fresh and locally sourced is the order of the day when it comes to the Atlantic Canadian cuisine. Owing to its extensive coastline, combined with fertile soils and maritime climate, the region is a veritable treasure trove of exquisite seafood and bountiful agricultural produce. You’ll find some of the best lobster in the world, alongside plenty more delights from the sea and a vast range of quality fruits and vegetables. Nova Scotia also has a long drinking tradition reflected in its many wineries, cideries, distilleries and craft breweries.

Of all the local delicacies to sample, lobster surely tops the list. A proud culture has emerged around this much-loved mouth-watering crustacean, which still remains the focus of working life in many fishing communities. Dishes come in dizzying variety, from crusty lobster rolls, to deep-fried lobster cakes and boiled lobster served whole drizzled with warm butter and lemon. Of course, other seafoods take centre stage as well, from delicate smoked salmon, to hearty seafood chowder. For something a little different to your usual evening meaning, meet up with some local fishermen who will happily help you fish and cook your own catch. There are also farmer’s markets galore, perfect for picking up picnic supplies for a long coastal hike, as well as plenty of opportunities to pick your own seasonal fruits and vegetables in the region’s farms. If you’ve got a sweet tooth, you won’t want to miss indulging in handcrafted chocolate truffle workshops and tasting sessions at the Fortress of Louisburg historic site.

The region is also jampacked with an extraordinary range of food-related tours, events and festivals, taking the excitement up a notch with live music and access to some of the most renowned chefs and innovative culinary experiences in the world. Stop by Devour! The Food Film Fest, the world’s largest festival dedicate to cinema and food, or indulge your taste buds in the months-long Savour Food & Wine Show. Halifax is jampacked with renowned restaurants dishing up quality locally-sourced fare, or you can choose to embark on a local tasting tour and even try your hand at whipping up traditional recipes in a cooking class. Beyond the capital, foodies won’t want to miss exploring the Seafood trail, encompassing no less than 85 distinct spots in a whirlwind of gastronomic learning and tasting experiences.

If all this wasn’t enough, there’s an incredible drinks scene to get to grips with as well. Take a guided tour of some of the region’s most renowned vineyards and wineries in Annapolis Valley. Treat your taste buds to unique signature wines and a vast array of original brews, featuring ingredients such as maple, jalapeno, pumpkin and vanilla. Also well worth exploring is the Nova Scotia Good Cheer Trail, a tourist route encompassing over 35 prime brewery, winery and distillery locations, taking in bucolic farmlands, spectacular coastline and plenty of unique heritage sites along the way.